As published in MarketingTribune on January 16, 2018. The world is turning. Faster and faster. As regularly as clockwork, futurists, management gurus and consultants everywhere are announcing radical changes, often assuming the role of modern prophets of doom. The end of marketing is nigh, brands will barely be of importance, the classic media are dead, robots will take over. It sometimes feels like the prediction of an apocalyptic world ending in 2012, which (thankfully) never happened. And nor will it for marketing.

These days many marketers suffer from the ’Alice in Wonderland‘-syndrome, a neurologic disorder which upsets the human perception of magnitude. Estimating the magnitude of a future evolution indeed is not an easy endeavor. We often extrapolate a given trend so exponentially that we simply make ourselves look totally ridiculous. Just think of the Pokémon GO hype which took over the world about a year ago and which would change the future of marketing and communication forever. GO reached its peak in 2016, when 28 million people were playing the game at the same time; but since then more than 4 out of every 5 users have dropped out.
However, we underestimate at least equally often the impact of a technological change on consumer behavior. Just think of the speed at which linear viewing and listening behavior had to make room for on-demand services such as Netflix and Spotify. Although nobody can see the future, it is important for us to develop an increased awareness of the possible errors of judgement related to the magnitude of change.

Tweetaway: Many marketers suffer from the #AliceinWonderland syndrome, a neurologic disorder which upsets the human perception of magnitude http://insit.es/2nsSiRN by @kristofdewulf via @InSites #mrx #business #marketing

Check out what is not changing

Today’s marketers probably pay too much attention to all the possible changes around them, which brings too much distraction. We can definitely learn something from William Bernbach, one of the three founders of DDB in 1949: “It is fashionable to talk about the changing man. A communicator must be concerned with the unchanging man.” He argued strongly that we should look beyond all the superficial changes around us and focus on the deeper-rooted human motives which are less or even not at all subject to change. In other words: think more consciously about your target group’s characteristics which you assume will not change in the coming 5 to 10 years. Use that to build a link with a purpose for your brand or company, which could facilitate a connection between various types of stakeholders and feed innovation and creativity. 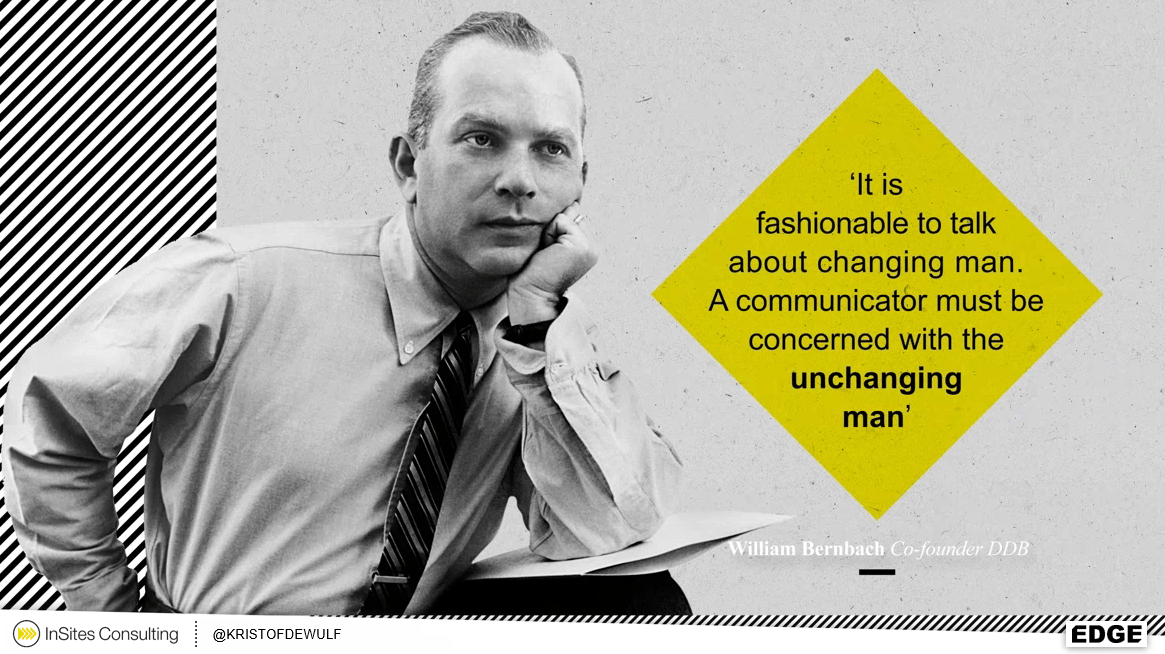 Tweetaway: Think more consciously about your target group’s characteristics which you assume will NOT change in the coming 5 to 10 years http://insit.es/2nsSiRN by @kristofdewulf via @InSites #mrx #business #marketing #unchangingman

Cross out the word transformation

Have you also had enough of the word transformation? The time has come for us to cross it out in our marketing dictionary. Just like the word digital no longer plays a part in a digital world, the word transformation has lost its meaning in a world in constant change. Transformation should become a natural, organic habit within brands and companies. Marc Zuckerberg’s approach is a good example: every 6 months Facebook rewrites its ten-year plan, so that the long-term vision is combined with a short-term adaptation capacity. Boston Consulting Group gives the same advice to marketing giants such as Unilever and P&G in their recent report “How big consumer companies can fight back”. Even though large FMCG companies cannot shrink to the size of their younger competitors, they will need to become more agile by embracing cross-functional consultation, experimental thinking and self-management.

Tweetaway: The word #transformation has lost its meaning in a world in constant change. It should be a natural, organic #habit http://insit.es/2nsSiRN by @kristofdewulf via @InSites #mrx #business #marketing


Prophets of doom are thriving on feelings of unrest, a lack of trust and a fear for the unknown, but usually they are holding the wrong end of the stick. Change is not as black & white as often depicted; almost always does it imply finding a new balance.
Curious for more? Request your free download of our Have we lost our EDGE? bookzine!