How often did you happen to come across a picture or video of an adorable cat or dog on the Internet which then made you smile instantly? Some of us go further and upload pictures or videos of their own pet or even write blogs about it. There seems to be a never-ending source of cuteness when it comes to cats and dogs! And when talking to pet owners, many of them will consider their pet as part of their family and will talk at great lengths about their adorable personality!

Mars, being one of the world’s leading food manufacturers, home of famous chocolate and candy brands as well as pet care brands such as Whiskas or Pedigree, understands that it is imperative to convey the explicit consumer engagement when it comes to designing pet products. That’s why Mars Petcare wanted to bring their R&D employees closer to the world of consumers and their pets! Mars and InSites Consulting joined forces for a consumer immersion project, aimed at changing the hearts, minds and actions of 200 R&D employees. We set up an online research community of 50 pet owners in the UK and a Consumer Connect website to link them with the Mars Petcare R&D employees.
The project unfolded in three stages, starting by engaging the employees with the consumer world via the Consumer Connect website, then inspiring them by playing a consumer quiz and discussing new topics in the consumer community based on the knowledge gaps and finally defining actions on how to translate the new consumer knowledge in their day-to-day job. The engagement and enthusiasm was clearly felt among both the Mars R&D employees and the UK consumers, who created more than 1,600 posts in 3 weeks! 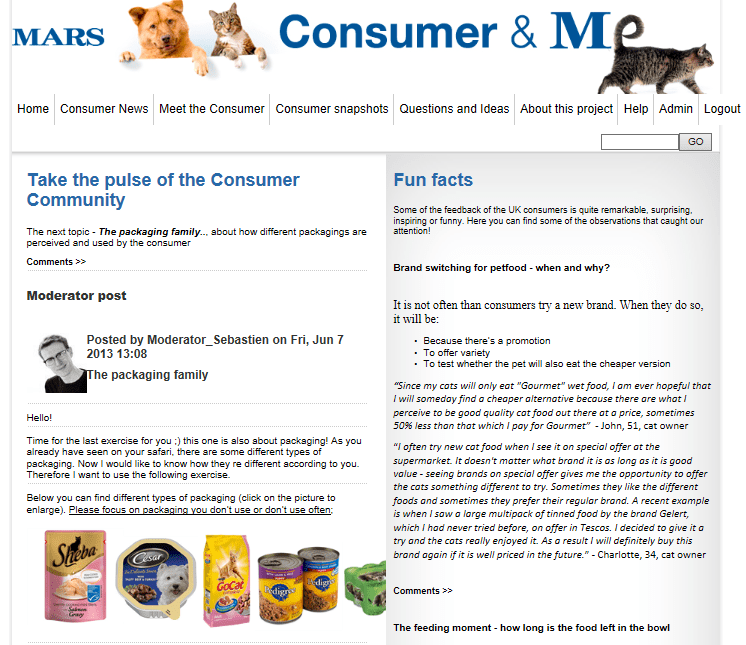 In terms of what we achieved, we gained an understanding of the impact based on a pre- and post-measurement among the Mars R&D employees who participated as well as in-depth interviews.
The Mars R&D employees were truly activated to connect with real consumers: more than 100 employees visited the ‘Consumer & Me’ website or played the consumer game. And 36 of them participated across all touch points – they became the internal ‘movers and shakers’ or consumer ambassadors, thus also setting the stage for continued consumer focus now that the project is over.

Finally, by bringing consumers and their pets to life, we managed to convey the emotional engagement between the pet owner and his/her pet towards the Mars R&D employees as well: “For me, this was a new and great tool to get a different view of how people use “my product”. I use it sometimes to get a break and new inspiration. It also makes me smile when I read something about funny consumer behavior I was not aware of!”

The journey for Mars R&D continues… This consumer immersion project also sets the stage for future episodes of the consumer centricity program and activated the movers and shakers who will help internally to make consumer centricity a success!
Want to find out more on our consumer centricity approach? Read our brand new paper Why every company needs a Chief Consumer Officer and discover five steps to become a consumer-centric thinking company.

Why every company needs a Chief Consumer Officer from InSites Consulting

Have you ever consulted Wikipedia? You probably did. But have you ever created or adapted a page on the world’s…

COVID-19 has now been around for much longer than any of us would have hoped or expected. Whilst in China…