Final part of a blogpost series on the InSites Consulting company values. You might have noticed we’re fans of the word ‘forward’. It is central in our tagline ‘Taking research forward’, we run R&D projects in our ForwaR&D Lab, and guess what? It is also at the core of our company values. After covering 6 of our company values over the last weeks (forward thinking, open, result-driven, we-oriented, adaptive, and respectful), it’s time to deal with our final value ‘daring’, nicely forming the acronym FORWARD!
“The more you chase money, the harder it is to catch it”. Mike Tatum
I love this video from Dan Pink explaining what drives us as human beings. Contrary to what many believe, money is not a core driver of motivation and energy, at least when it relates to applying cognitive skills needed for conceptual and creative thinking (as opposed to mechanical skills needed for simple, straightforward tasks). Following ample evidence from scientists around the world, people like doing what they do for 3 core reasons: they can work autonomously, they get better at something (mastery), and they act in line with a bigger purpose.

Getting real about the philosophy behind Dan Pink’s book ‘Drive’ requires us to leave the beaten tracks and take a more daring route. It means we need to embrace out-of-the-box thinking, create a fun environment stimulating creativity, and cultivate an environment that fuels positive energy day in, day out. Let’s take a look at a few examples. Companies such as 3M and Google have long been praised for granting employees a 15% resp. 20% time off perk, allowing them to work on side projects, thereby producing things that would normally never emerge. It is a clear example of giving people more autonomy, moving away from compliance and paving the way for self-direction. That this is daring was recently demonstrated by the fact that Google abandoned its own 20% rule, restricting the usage to just a limited selection of Google employees. 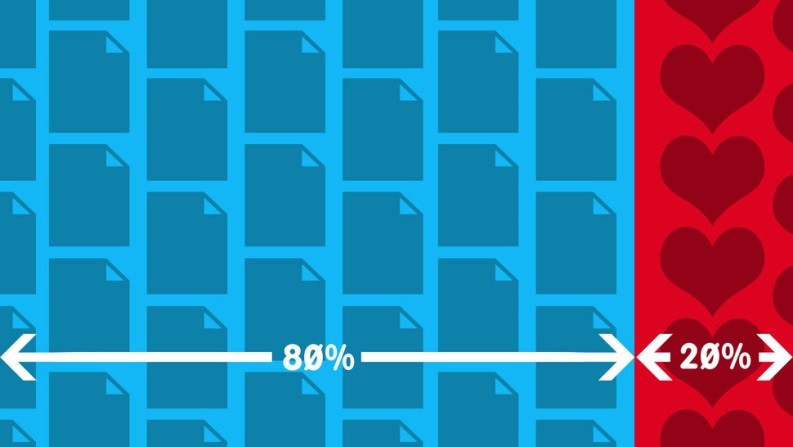 A nice example related to mastery is the Fun Theory, an initiative of Volkswagen, stimulating people to come up with ideas that are fun and at the same time change human behavior for the better. Kevin Richardson, winner of the fun theory award, wanted to get more people to obey the speed limit by making it fun to do. The idea was so good that Volkswagen, together with The Swedish National Society for Road Safety, actually made this innovative idea a reality in Stockholm, resulting in an average driving speed reduction of 22%. In general, the whole idea of “gamification” (application of game thinking and practices to non-gaming activities and processes) is permeating our media, our entertainment, our education system, and the work place, not to mention potentially change the way we interact with life itself. Ever heard of Foldit? It is an online puzzle game with players collaborating worldwide to fold protein molecules in three dimensions. Whereas scientists have spent 15 years trying to unlock the structure of an AIDS-related protein, Foldit players were able to solve the puzzle in just 10 days! What is cool about the above mentioned examples is that people are doing this just for fun: they create stuff for free and give it away rather than sell it.

Purpose is what separates great from good companies, making their work important instead of banal. Examples of great missions abound: Sony with “to make Japan the nr. 1 technology country in the world”, Apple with “to make a dent in the universe”, Facebook with “to give people the power to share and make the world more open and connected” or Disney with “to create happiness by providing the finest in entertainment for people of all ages, everywhere”. But also less ‘cool’ companies such as Procter & Gamble attach a lot of importance to the idea of purpose, as stated by CEO Bob McDonald: “Purpose is what has made this company successful for 175 years.” Great leaders are dealers in hopes and dreams, passing on their enthusiasm to others. 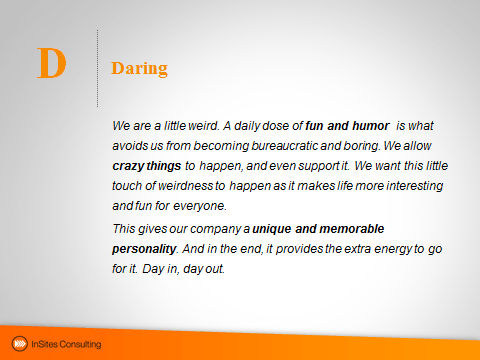 Creating a fun, purposeful and energizing environment is what we mean with ‘daring’. When it comes to purpose, we take along our team members on a quest to transform the market research industry from dominantly one-off static monologues with consumers to ongoing dynamic dialogues. We believe in cherishing our ‘daring’ value not just because it is fun, but because it fuels positive energy from all of us. We allow and support crazy things to happen: our CSO Tim Duhamel having the company logo tattooed on his leg, our IT people organizing one-day ‘devathons’, making funny lip dub movies to introduce our yearly congress theme, our qualitative consultants taking up the challenge to conduct online discussion groups 24 hours in a row for charity, and of course taking every good opportunity to party and celebrate together. 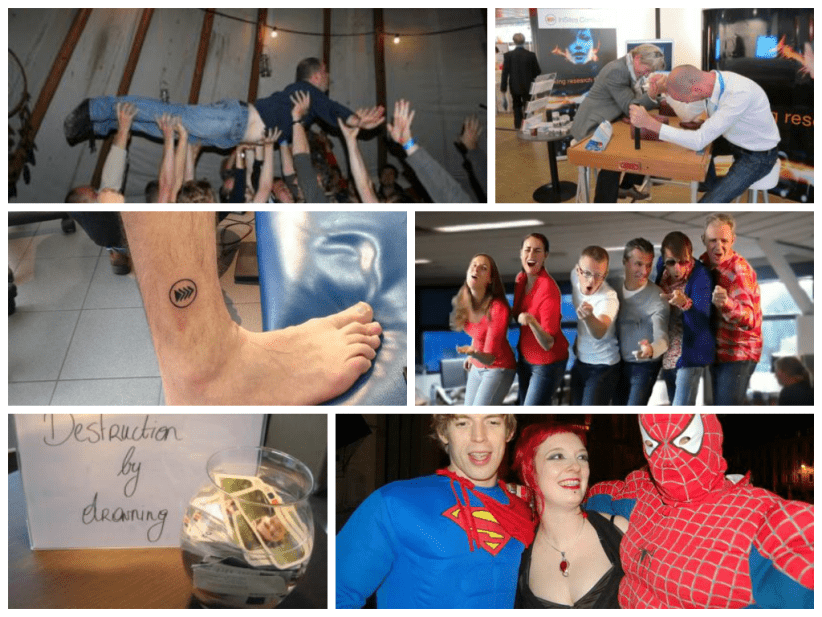 This is the end of our company values blog post series. Hope you liked it! We all know that living values is far more important than just expressing them. Nevertheless, the act of sharing our values with you is important as it helps you know what to expect from us and it raises the bar for us to deliver against those expectations. So, whenever you feel we could be doing a better job of living up to our values, please share your thoughts and feedback so that we can keep on taking our values forward. Thanks!