No sweat, no glory! No hamburger, no football?

Both the consumer and the business world are rapidly changing. Organizations need to become more open and agile to be the winners of tomorrow. Successful companies embrace the empowered consumer and engage in a continuous dialogue with the outside world. Doing so, they are able to react quickly to new trends, emerging needs, expected improvements to products or services and anticipate actions from the competition.
One of tomorrow’s winners surely is Club Brugge, a top Belgian football club with an extraordinarily engaged audience. Since 3 years now the club annually invests in market research to evaluate its offering and detect new opportunities to improve stakeholder relations. FCB is now taking consumer collaboration to the next level. Last month it officially launched its Fanboard, welcoming representatives of the consumer community as a board of advisors on a regular basis. There are no taboos and when Fanboard proposals are feasible, they are integrated in the company policy.
During a first Fanboard gathering a number of touchpoints, including the aspirations for a new arena, have passed in review. “Listening to what is happening at all levels is of paramount importance. We all look forward to the construction of the new stadium. The creation must and will be a gem. Participation of our supporters is necessary to make this happen. It is ultimately ‘their new big house’. They need to feel good there.” thus Klaus Van Isacker, Communication Manager.
At InSites Consulting we are true supporters of such structural consumer collaboration initiatives. But I will not further preach this here. Just join one of our upcoming Smartees to be inspired by our vision and cases. And if you show up with ‘Chief Consumer Officer’ on your business card you will surely receive a nice treat! Maybe wrapped in a little magic black box…
What follows now is a little story of my own, as also I recently had the honour of connecting with the Club Brugge management. Not as a Fanboard member, but as a partner privileged to witness the exceptional engagement of the blue black community.

#WeAreBruges. And so was I on Friday. The little magic black box held its promise. It arrived on Thursday. Even if it had been empty, a girl’s imagination could have filled it. With shiny bracelets, elastic bands to hold long hair, gratuitous bottles of perfume or any other dreamy girly gadget. Of course those are part of a past long gone, but this posh packaging surely aroused plenty of positive nostalgia. I could have left it unopened and would still have been content. Or maybe not…
When opening it, I soon realized it was a men’s box sent straight from a men’s world. Would they cherish alike childhood memories on Mars? “Mr Magali Geens” It was handwritten with care on a shiny white card with a golden frame. Written by a lady – no doubt about that – but one clearly accustomed to inviting men to the games. Indeed it proved to be a ‘she’, a dazzling she, all those present would agree. The perfect host! Renowned research indicates that 84% of the Blue Army fans is male. So can’t blame the lady!
I floated to the arena on a permeating meat & onion scent. More nostalgia coming in. I grew up in a football family. I must have been about 6 when I first put my teeth in one (or two) of those sandwiches. On a school night! But Friday I owed it to ’the box’ (holding the promise of knife & fork food) to suppress my excessive salivation. I will come back for one of those burgers though! Another day, another game. But on this particular occasion I would witness football the civilized way. After having a fancy diner prepared by a fancy cook with the obligatory signed recipe book*; did I mention I hate cooking and everything related to it apart from eating?
The athletes were unleashed from the catacombs, the audience showered in uplifting music, all seats sold out. Ready to sweat. Ready for glory! Armed with a premium Staritsky & Levitsky cocktail (officially my first alcoholic beverage in 2014 and totally worth the wait) I entered the arena too. Not to nest in a plastic bucket seat, but in a ‘shame chair’ behind the window ‘somewhere up there’. At least that is how I looked up at them, being that little blond girl shivering in the outside evening chill. Not for all the money in the world would I have switched seats back then.
And still, on Friday I envied those breathing white circles in the air out there. As if the angel host overheard my prayers, the windows opened. The modern armoured gladiators (fluorescent shoes all over the lawn) saluted the big blue-black family hosting their display. After a respectful remembrance of the old chairmen (RIP Mr Fernand De Clerck), Cup winner Sporting Lokeren was ready to be as crushed as the ice in my blueberry cocktail. I managed to miss the first goal (in my defense: one would never miss a goal from a plastic seat) but four more would follow. What a treat! 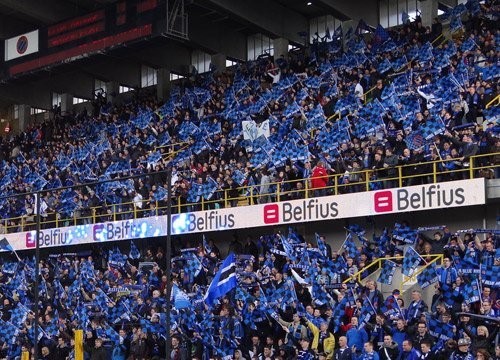 #clulok 5-1. My Twitter stream would repeat it to me over and over again the day after. But I was there, in the moment! And I loved it. And I will be there again. And I will look up to the boxes in the air and know they too love the game. And they applaud. And they shout. And they do the American wave. And they drink. Not beer, Ukrainian vodka. And they simply were lucky to have received a little black box. “Luck is a dividend of sweat. The more you sweat, the luckier you get.” – Raymond Albert “Ray” Kroc. This guy pretty much invented the hamburger, so he must have known!

Tweetaway: Luck is a dividend of sweat. The more you sweat, the luckier you get insit.es/1ifcknm by Ray Kroc #nosweatnoglory cc @clubbrugge
*P.S. @PeterDeClercq1: I would recommend you any day (NPS +100), but I would pick the cheap burned meat over the fish-on-hot-salted-stone any match. And by all means: don’t start tweeting, just keep cooking! #bonappétit #worldchampion
Thank you @clubbrugge for the memorable experience.
We warmly welcome you to join our Chief Consumer Officer Smartees Seminar April 24. Here we will also bring a case with the Belgian Football Association: The 12th Man Community.

We invited Jo Stanbridge, Global Insight Lead Sensodyne at GSK, to share her experience on collaborating with leading-edge consumers to fully understand the importance of consumer trends and how they manifest within different cultures.

We invited Gaël Chevé, CMI International at L’Oréal Active Cosmetics (Cerave, La Roche Posay and Skinceuticals), to talk about the value of collaborating with ‘the 90’ or everyday consumers, and how this helps L’Oréal to further develop their consumer-centric thinking.

Different people come with a different set of unique skills and competences. Research has shown that out of every 100 people, 90 merely consume content, 9 will like, share or react to what is created, and only 1 will actually create something. And this is no different for consumers.